For me, the iconic, optimistic representation of modern Australia is that famous photo of Gough Whitlam and Vincent Lingiari. It captures a moment of great practical significance, especially to the Gurindji people. It is also a powerful and enduring symbol of how, as the member for Sydney said in this place last week, Gough Whitlam made room for all of us in our nation. So too, the Racial Discrimination Act, a significant achievement, a signature achievement of his government. Its birthday is tomorrow. In passing this law, the Australian parliament made clear the standards by which we should treat one another. Forty years ago Senator Murphy, in his second reading speech, said:

The purpose of this bill is to make racial discrimination unlawful and to provide an effective means of combatting racial prejudice in this country. 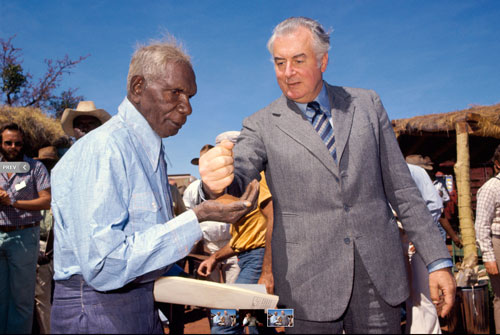 While the impact of the Racial Discrimination Act has been transformative and enduring, significant challenges remain. In acknowledging the anniversary and especially in the shadow of Gough Whitlam’s passing we would do his legacy a great disservice by resting on our, or rather his, laurels. Of course, only a few months ago this government was planning on removing vital protections from the act. Forty years on we are not yet a racially equal society and this is not good enough.

A few days ago a young woman was assaulted in Lalor, in my electorate. It appears she was attacked by reason of how she chose to dress. Many Muslim Australians are feeling victimised at the moment. Of course they should not be victimised and marginalised in this way or at all. This week, research released by the Scanlon Foundation highlighted this and other challenges to multiculturalism, while containing many positive findings, it should be noted. Today the Federation of Ethnic Communities Council of Australia has called for focus to be placed on fostering social inclusion and building community harmony for continued development of a strong, resilient and inclusive Australian society. I agree. In this context, in a speech given in August, the Race Discrimination Commissioner said all that needs to be said about the proposition that protections against hate speech be weakened. That is:

If Australian society is committed to racial tolerance, this commitment should be reflected in our law. The law should set some civil standards of acceptable behaviour. The law should provide remedies for public acts of racial vilification. There should be no legal right to be a bigot.

Indeed though I think we can, we should and we must aspire to more than tolerance, I also believe now is a good time to think seriously about the extent to which the present provisions meet all of our aspirations towards equality. I ask myself: can we do better? In this regard I take heart from the spontaneous visceral rejection of attempts to license bigotry in the communities in the electorate of Scullin and around the nation.

This reaction can mean something more than simply a negation, and instead be a marker for a positive restatement of our values towards racial equality—cultural and legislative. Today is not simply the eve of the anniversary of the Racial Discrimination Act—that powerful statement of what Australia should and could be. It is a day on which we must, all of us, turn our minds to how we can best support social cohesion in Australia. Just as the Racial Discrimination Act enabled there to be room for all of us in our nation, today we must recognise that barriers remain to achieving both racial equality and social cohesion.

As lawmakers and as community leaders, this is pressing work for us to attend to in these challenging times. Let us ensure that our laws set the standards we should aspire to. Let us be heard, without equivocation, in standing up for a society in which everyone feels they have an equal stake.

Andrew Giles is the Federal Labor Member for Scullin in Victoria. Prior to being elected in 2013, Andrew was a principal lawyer at Slater & Gordon, practicing in employment law, where he helped people uphold their rights at work and resolve the issues they face in their workplace.

Labor and the Tools of Success