In the name of love

British film Pride tells the story of two communities coming together for a common cause – police state oppression under the leadership of Conservative Prime Minister Margaret Thatcher, and vilification by the tabloid press. But the film isn’t about the politics; it’s about what can happen when solidarity overcomes parochialism and prejudice.

The film depicts the complex and turbulent era that was the 1980s in working class Britain simply. It shows that while Thatcher framed the mine closures for Britain’s economic benefit, her political motives to destroy trade unions were real and brutal. With 30 years hindsight, few in Britain would dispute it’s more complicated than that, despite knowing now that this was a textbook example of how not to do economic change.

The 1980s were also a time of great social change, with gays and lesbians fighting hard for equality, recognition and an end to homophobia, after continuous and coordinated human rights campaign efforts in the previous 15 years. It was an era when the AIDS epidemic was stigmatised and evidence based information was in short supply, and the tabloid press perpetuating the most vicious of myths.  Thatcher had formed an unholy alliance with the editor of The Sun, the most widely distributed paper at the time, and owned by Murdoch. Together, they ran a deeply offensive campaign based on fear and hate, an alliance that would spearhead many battles over the coming decade.

It was these common enemies that motivated Mark Ashton, the founder of Gays and Lesbians Support the Miners (GLSM). Ashton was a liberal thinker and a smart campaigner. Initially setting out to fundraise for the striking miners, ensuring that the miners weren’t starved into submission, Ashton and GLSM took on a far greater role in supporting the striking miners of Banwen, Wales.

What proceeds from here – in Pride and in history – is a journey of acceptance and solidarity, a relationship that cemented Labour as the party of social justice and equality for all. 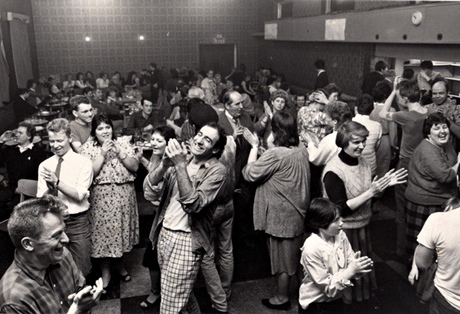 Made in the style of Billy Elliott which was also set during the miner strike, Pride gives weight to issues of significant importance through lovable characters and a light hearted but impassioned approach.

Importantly, this historical fight was real, and so too were the outcomes.

Until now, the story of GLSM existed in the memories of a few, and in legend for many. Now, this remarkable tale exists in the history books and its heroes have been recognised in the international labour movement. But, these heroes are just a few of the many who have existed over the decades of our movement’s history, going above and beyond to overcome the issues of social justice in their time. It’s my hope that in the coming years, we can expand our important Labor History project to capture not just our leader’s achievements, but stories of our tireless change campaigners. It is through these stories that we will own our history and celebrate our achievements. Not through the lens of the Australian, or in Ashton’s case, the Sun. And we do it not because that time was better for our movement, but because it shows us how far we’ve come and how much has changed.

So, if you’re going to do one thing this weekend, or even this summer, make it watching this film.

And once you’re done watching it, (not before!) read this great article by Kate Kellaway for the Guardian – Kate interviews all of the living main characters for their stories and reactions to the film.

Jane is the Chifley Research Centre’s Executive Officer, and gets a kick out of publishing progressive ideas from Australia’s best thinkers. She has a Bachelor of Arts from Central Queensland University, and a Post Graduate Diploma in Policy and Applied Social Research from Macquarie University. In 2011, Jane was selected as a Young Progressive Leader as part of the inaugural Progressive Leaders Program.