Like whisky, too much inequality is a bad thing

Inequality, like whisky, is better taken in moderation. Margaret Thatcher reportedly liked the latter and didn’t much care about the former. There are those who say, as she did, that inequality does not matter: what matters is whether people are better off, in real terms, than they were before. She said that those who complained about inequality were really saying that they would “rather have the poor poorer, provided that the rich were less rich” (Hansard, 1990). That argument stops being persuasive right about the time that it becomes obvious that extreme inequality is a drag on growth, and when it becomes clear that incomes are stagnating (see, e.g., Alvaredo, et al, 2017). In other words, inequality is less defensible when it makes people (other than the rich) less well-off than they otherwise might be.

It is perfectly orthodox to argue that inequality is a precondition of economic activity – at worst, a necessary evil. The possibility of private reward provides an incentive for innovation. This can be readily admitted, and generally is by those sounding the alarm on inequality. Dabla-Norris et al (2015 at p. 6, see also e.g. Oxfam, 2014, p. 1) of the International Monetary Fund (IMF), acknowledge this argument, citing Lazear and Rosen (1981) as showing that “[i]nequality can … influence growth positively by providing incentives for innovation and entrepreneurship.” Acknowledging that does not, though, necessitate the conclusion that extreme inequality is unproblematic. The proposition that inequality can incentivise innovation and activity has nothing to say about the question of degree: how much inequality is a positive influence on growth, and does there come a time where that effect is neutralised? Saying that inequality provides incentives for innovation is not enough. There’s a movement towards recognising the negative effects of extreme inequality underway at liberal institutions such as the IMF under Lagarde, as is evident from her speeches (see, e.g., Lagarde, 2015), and from the work being done there. For example Dabla-Norris et al of the IMF have argued (2015, p. 6) that “[i]ncome distribution matters for growth,” saying that greater inequality (measured by a higher net Gini coefficient) is “associated with lower output growth over the medium term,” and that there is an inverse relationship between the income share accruing to the rich, and economic growth (with an observable reduction in Gross Domestic Product growth). There is also a growing acknowledgment of the differing consequences of inequality for different people. For example, Lagarde (2015) has acknowledged that women experience more pronounced inequalities than men. Economic inequality is a women’s issue, both because women are more likely to be poor and because women’s political power is diminished when there is greater economic inequality (Bartlett, 2017, p. 269). The same can be said of other intersections between cultural and other forms of relative disadvantage, and economic disadvantage. 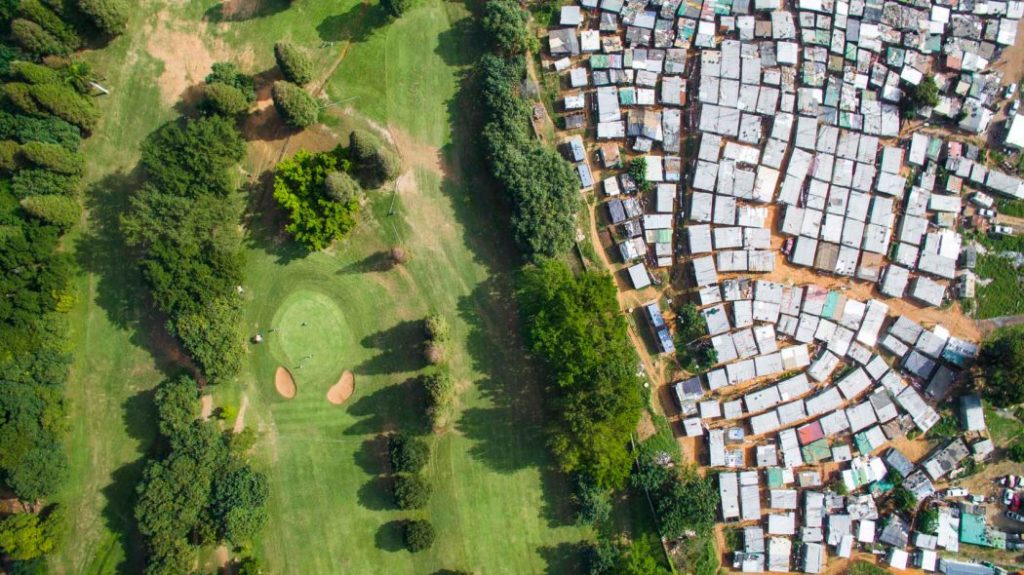 This issue of power is central to the way that we should think about inequality, its problems, and the impediments to meaningfully responding. We can’t just leave it to the invisible hand. Inequality is the water and grain of capitalism’s whisky; it is a system whose natural state is the accumulation of more capital by owners of capital. Many economists including Atkinson, Piketty, Leigh, Stiglitz and Krugman have written extensively about the growth in inequality. Alvaredo et al (2017, p. 11) published a report showing that globally, inequality has risen sharply since 1980, both in and between nations. This period coincides with the rise of neoliberalism. Thatcher was influenced by Hayek (Yergin and Stanislaw, 1998, p. 89) and Reagan by Friedman (ibid, p. 130). Under their leadership, neoliberal ideas about the desirability of minimal government intervention in markets, free trade, deregulation and privatisation became dominant. As Bell and Keating have noted (2018, p. 1), there has been a political consensus for most of the last half century about the role of government in capitalist economies. This political consensus has meant that most large Western nations have been governed either by overtly neoliberal leaders or by leaders influenced by neoliberal thought despite their social democratic or other orientations (e.g. the Hawke-Keating Labor government). Now, there is growing recognition of the contribution of neoliberal policies to growing inequality, and of the adverse consequences of extreme inequality.

Stiglitz and others have been heavily critical of the IMF and other liberal bodies. The IMF has become noticeably more concerned with inequality, as has the Organisation for Economic Cooperation and Development and the World Economic Forum. The United Nations’ Sustainable Development Goals include a goal to reduce inequality within and among countries. The release of Piketty’s Capital in the 21st Century along with other major books has centred concerns about inequality within the public debate.

There have also been reactions to greater (and extreme) inequality by those experiencing its adverse effects. As Bell and Keating point out (2018, p. 5), there are people “unhappy” at “losing” from the growing inequality trends, and there are “attendant political reactions” including the backlash against globalisation, the rise of the European Right, Brexit, and the election of Donald Trump in the United States. In addition, there has been significant research into the connections between economic inequality and conflict. Cuesta (2017, p. 13), for example, argues that inequality, and redistribution that would exacerbate it, is a key driver of coups. The foregoing examples cannot be considered in isolation from each other. They are arguably all manifestations of the same unrest – that is, political instability arising from the relative economic differences between people in given political contexts.

As noted there is evidence that extreme inequality can cause slower economic growth. This is the basis for the Lagarde (2015) speech and the IMF note (Dabla-Norris et al, 2015, pp. 6-7) referred to above. Dabla-Norris et al attribute (2015, p 8.) this effect to the deprivation of “the ability of lower-income households to stay healthy and accumulate physical and human capital”, which has adverse consequences for labour productivity, and for changes in mobility between generations. They also note that greater concentration of incomes could “reduce aggregate demand and undermine growth, because the wealthy spend a lower fraction of their incomes than middle- and lower-income groups.” In addition they refer to evidence that extreme inequality is linked with financial crises. Similarly, Summers (2016) argued that greater saving had been driven by, inter alia, the increase in inequality and the share of income going to the wealthy. Excessive saving is a drag on demand, reducing growth and inflation, and leading to drastically low real interest rates to the extent that traditional monetary policy becomes ineffective (i.e. secular stagnation). This phenomenon has been destabilising in the wake of the Global Financial Crisis as central banks have turned to unconventional monetary policy to try to respond.

In addition to political and economic instability, increasing inequality is also arguably contributing to social instability. There have been a variety of studies about connections between social instability and other social and related problems, and inequality. Dabla-Norris et al say that extreme inequality contributes to conflicts, because it damages trust and social cohesion, and makes dispute resolution more difficult (Dabla-Norris et al, 2014, p. 9). Khambule and Siswana (2017) have argued that inequalities have undermined social cohesion in South Africa. There has been a study about the connections between inequality, social cohesion and dental health in Brazil which found (Pattussi et al, 2001, p. 922) that relative rather than absolute levels of income were stronger determinants of the onset of dental caries (decay and cavities). That study also cited earlier studies indicating that violence can be linked to income inequality (Pattussi et al, 2001, pp. 921-922). Similarly Wilkinson (1997, p. 1504) cites research showing that more egalitarian countries and states have lower mortality rates, because of the reduced social cohesion associated with inequality.

Inequality has been increasing markedly in the past few decades. Describing inequality as a means by which innovation is incentivised and spread, and by which opportunities are therefore created, tells only part of the story and ignores the damage done when inequality becomes extreme. Extreme inequality is a drag on growth, for the reasons described above, eroding the persuasiveness of arguments that inequality is a necessarily evil, needed for innovation and opportunity. It also gives rise to political, economic and social instability. Accordingly, seeking to curb inequality is not just legitimate but necessary if we wish to avoid a future where a small number of people are owners and the rest of us are left not just relatively poorer than them, but relatively powerless compared to them.

If that is accepted, then action should be taken, to ameliorate rising inequality. Solving an economic problem such as severe or extreme inequality cannot be left to the self-interested acts of individual economic actors alone. Various responses have been proposed. For example, Bell and Keating (2018, pp. 339-340) argue for a focus on demand-side focussed macroeconomic policy, as has Summers (2016) and others. Piketty, and Bell and Keating, have argued for redistributive policy (Bell and Keating, 2018, pp. 339-340), including greater taxation of wealth (Piketty, 2014, p. 663). They have also advocated strongly for greater public investment in education, with Piketty (2014, p. 27) describing the diffusion of knowledge and investment in training and skills as the main forces for convergence. The various prescriptions for responding to inequality will, of course, face opposition, not least because the political and economic neoliberal consensus is only beginning to be eroded, and because, as Oxfam has noted, economic inequality leads to democratic capture which begets policies and settings that reinforce rather than reduce inequality (Oxfam, 2014, p. 2). These impediments must be overcome: too much whisky is a bad thing, but too much inequality is much, much worse.