Posted on August 6, 2014 by Polo Guilbert-Wright

When the politics of austerity is debated in Australia, my first thought is always of the London riots.

I was then living in London after studying at the London School of Economics – where robust discussion of politics, economics and policy had been our daily bread.  But it was those riots which made me realise just how close social and economic tensions were, constantly bubbling under the surface, waiting to erupt. They also revealed, starkly, the deep inequalities that existed in one of the world’s greatest first world cities.

Much of the violence was mindless vandalism but its source could be found in a reaction to conservative political responses to the GFC.

It was chilling to see how the Conservative Party in the UK used the GFC to impose austerity measures, to entrench the idea of needing to shrink the state and squeeze the public sector. They did this whilst shamelessly refusing to punish the culprits of the crisis in the first place – the pin-striped bankers and financial traders who brought the British economy to the brink. 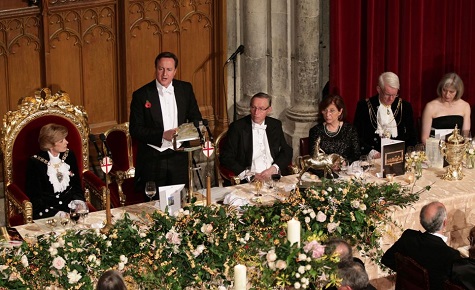 British Prime Minister David Cameron announcing that austerity is not just a passing phase and Britain should get used to having a ‘permanently’ smaller state.

His government has shamelessly used the British austerity template without the crisis. Tony Abbott, through the Commission of Audit, fabricated a ‘budget emergency’ and used a slogan ‘ending the age of entitlement’ to impose British style austerity cuts.

In fact, he’s gone further. I’m not going to defend the UK Coalition austerity measures, but one fundamentally important point to make is that they protected spending on health, education and overseas aid. The UK Coalition recognised the importance of investing in future generations. Abbott meanwhile has slashed $80 billion out of health and education with a further $8 billion from overseas aid.

The election victory in 2013 was Abbott’s one and only opportunity to get square with what the Australian conservatives saw as their sworn enemy – those they characterised as the unproductive, recipients of overtly generous welfare, the unemployed, the public sector and anyone associated with the union movement.

The 2010 UK General Election wasn’t a victory for either Labour or the Conservatives. Neither side convinced the electorate they deserved to govern outright. Even though Labour eventually lost power the failure of the Conservatives to achieve outright majority must be seen as a partial failure.

On one side you had Gordon Brown, who ran a terrible campaign, but advocated for a continuation of Keynesian policies. On the other side you had David Cameron promising the ‘age of austerity’. The same cannot be said of Tony Abbott. He remained tight lipped and stone faced about their plans for our community prior to the election.

Perhaps in the UK at the time the public mood was sympathetic to the idea of austerity. Or rather it was the typical British attitude that we all have to do our part and collectively tighten our belt. If so, there was some justification for it.

The British community had witnessed two banks, Northern Rock and Royal Bank of Scotland being bailed out by the taxpayer. The media coverage at the time was dominated by economics and finance. The UK economy was clearly facing financial disaster.

Working at the UK Home Office at the time I saw our Department go through a 25% cut to its budget, a freeze on recruitment and a freeze on salaries. After two years of austerity, staff morale was low, the head count was halved and the workload overwhelming. This was a picture played out in workplaces across the UK.

Last year in the UK a joint study by the Institute for Fiscal Studies and the Institute for Government warned that a further 250,000 public sector jobs could be lost (the Australian public service employs around 160,000 people) because of sluggish economic growth. They said that both the 2015 and 2020 General Elections are likely to be fought on grounds of austerity, and that the situation could worsen with the decline of North Sea oil and the rising costs of healthcare.

If the joint study is accurate, the UK public will experience more than 10 years of austerity politics. That’s a decade of a conservative agenda driving to further divide the country into haves and have-nots.

A recent UK Oxfam report found that economic stagnation, the rising cost of living, cuts to social security and public services, falling incomes, and rising unemployment have combined to create a deeply damaging situation in which millions are struggling to make ends meet. Over the decade to 2020, an additional 800,000 children are expected to be living in poverty – almost one in four British children. All this under a conservative ideology that declares Britain will be great again.

All this, despite David Cameron passing the Child Poverty Act committing both current and future governments to take action to eliminate childhood poverty. The Oxfam report puts into question that commitment as the UK austerity measures will no doubt have a direct correlation to the rise in children living in poverty.

The UK experience of austerity has failed. This has been the slowest recovery in this century. Is this really the economic model we should be following? It is a deeply worrying prospect that this is what Abbott has planned for our country.

On returning home in 2012 I was pleased to see nothing like this was happening in Australia. The reality was that we had a strong economy, strong financial institutions and a Labor government that responded appropriately to the crisis.

But those 22 years of consecutive economic growth and modest public spending has resulted in a level of public complacency and apathy.

Australia’s unemployment rate is less than half the average of 12.1 per cent for the core EU states.

An IMF report recently confirmed that Australia would still have the second-lowest government net debt as a per cent of GDP among OECD countries by 2018. Our level of net debt is around 10% of GDP, in countries like the US, Germany, UK, it’s about 70-90% of GDP.

When the UK government austerity measures were introduced it appealed to the national interest, it was widely reported as being justified at the time. But after close to five years the appetite for another five to ten years is rapidly diminishing.

The hunger for such harsh measures in Australia simply doesn’t exist. The first Abbott Budget is widely seen as being unfair, targeting those with the least in our community with permanent changes while those that have the most are imposed with temporary measures such as the 2% tax increase.

In a deliberate attack the government is committed to cutting young people off from welfare for six months, deregulating our higher education system and a proposal to introduce a $7 general practice co-payment. In the long-run austerity measures like the co-payment will cost our health system and taxpayers more, not less. GPs help to identify the early warning signs of more serious and expensive illness. The measure could also result in falling vaccination rates and lead to poor management of chronic diseases, all to the long-term detriment of the Australian people.

Bizarrely at the same time the Abbott government is forging ahead with a multi-billion dollar paid parental leave scheme, continues to forgo billions of dollars in revenue because of superannuation tax concessions and continues to provide billions of dollars in subsidies to the mining industry. If it’s a choice between pensioner pain or corporate largesse, this government will always side with the big end of town.

Austerity measures have not delivered even on their narrow promise. David Cameron’s government has not delivered a single budget surplus, despite the savage cuts. It’s time to acknowledge the current policies have not worked.

The ideology of the Abbott government to introduce austerity politics in Australia is shortsighted. It was Labor’s Keynesian approach that saw Australia weather the worst economic crisis since the Great Depression.

Martin Luther-King said, “the arc of the moral universe is long, but it bends towards justice.” Eventually the Australian people will see just how unfair this budget is and how untrustworthy the Abbott government is. Our hope is they realise sooner rather than later so that the arc of justice can bend towards Labor come 2016.

Polo Guilbert-Wright is a graduate of public policy from the London School of Economics. Between 2005-07 he worked as a policy and later a media adviser to a number of NSW Ministers. In 2007 he moved to London where he worked for a global public affairs consultancy before becoming a media adviser in the UK Home Office, responsible for immigration, security, and law and order. Since returning to Australia in 2012 he has been working for a leading trade union. He holds a BA/LLB from the University of NSW and tweets @pologuilbert