Ben Chifley and the bank nationalisation

In August 1947, Ben Chifley’s Labor Government decided in favour of nationalising Australia’s private banks. The controversy is well-remembered – though the Chifley Government’s purpose, to establish modern central banking over the objection of some finance sector interests – perhaps less so.

In fact, there is growing historical evidence that Chifley’s plans for central banking in Australia, culminating in the nationalisation decision, may have originated at least in part from the failure of secret talks between the government and the private banks – and from a misunderstanding about the nature of the banks’ opposition to his earlier banking legislation in 1945.

A few years ago, I became intrigued by suggestions made by Chifley’s biographer L F Crisp (Chifley, Melbourne 1963, pages 324-5) and in H C Coombs’ autobiography (Trial Balance, Melbourne, 1981, pages 115-6) that in 1947, Chifley had had – perhaps through an intermediary – discussions with some of the private banks. 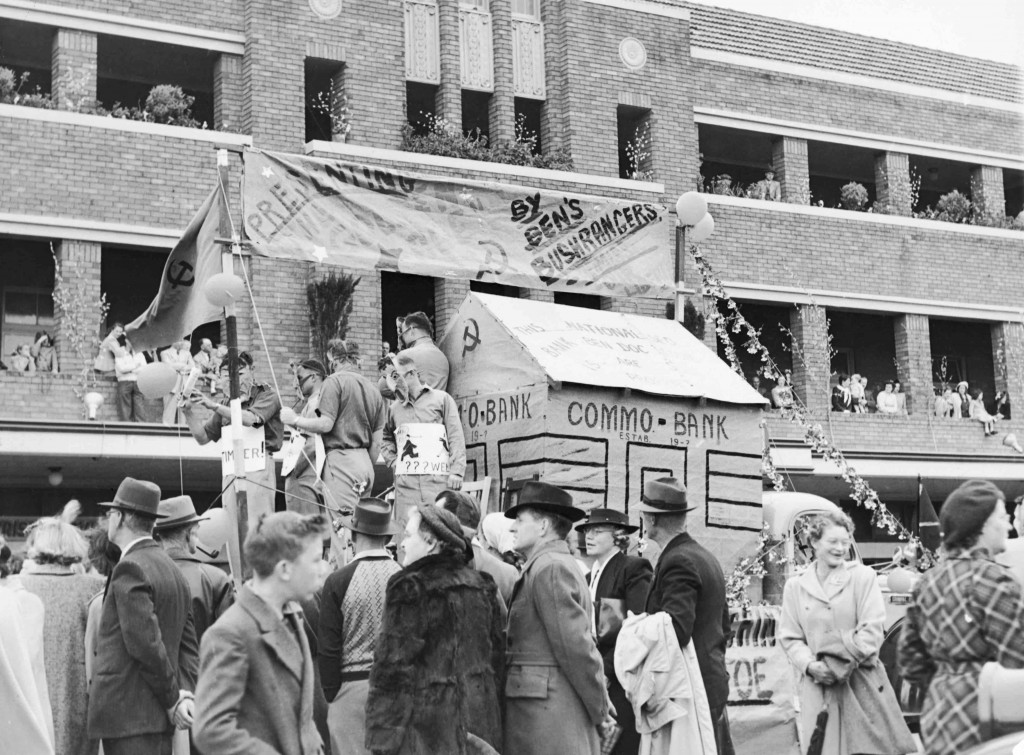 The 1949 election was fought over Labor’s plans to increase the role of government in the running of Australia’s economy. The Chifley government was determined to nationalise the private banking industry and went to the 1949 election on that platform. This photo shows banking employees protesting this policy. SOURCE: National Archives Australia

These concerned the High Court challenge to two aspects of the new Banking Act, which was then less than two years old. The Melbourne City Council had challenged section 48, not then in operation, but due to enter into force on 1 August of that year. In effect, section 48 required State governments and authorities holding accounts with private banks to transfer those accounts to the Commonwealth Bank or to State banks.

The other apparent aspect concerned sections 18-22 of the Act. Chifley regarded these last sections as the core of the Act. They required the private banks to hold in special accounts with the Commonwealth Bank such sums as that Bank might specify, the object being to control the supply of money.

It was the failure of these discussions with the banks – from Chifley’s point of view – which led to the August 1947 Cabinet decision to nationalise the private banks.

I subsequently sought to find confirmation of these discussions, and of the identity of the intermediary, among the records of the various institutional and personal players in the relevant events. The key period was between 29 May, when the Melbourne City Council writ was issued, and 16 August, when Chifley announced the Cabinet decision made that day to nationalise the private banks. Direct confirmation has proved impossible to find, but inferences pointing towards confirmation may be drawn from the relevant events; indeed some of those events make no sense unless there had been dealings of the kind described by Crisp and Coombs.

What has been confirmed is some agreement among the various individuals concerned – politicians at various levels, lawyers and bankers – to keep the whole matter secret. As an example, the reasons for the decision, on the day the High Court proceedings began, or the day before, not to proceed with the apparent challenge to sections 18-22, are not recorded (or in some cases not referred to) in the files of the Council, the written histories of the Commonwealth Bank or the private banks, the available contemporary correspondence of the most senior officers of those banks, the records of the Commonwealth Treasury and the Commonwealth Attorney-General’s Department, and the relevant histories, biographies and autobiographies of the times – all of which were consulted during the search. It is a reasonable inference that there was not only some agreement among the Council, the Melbourne-based private banks (or at least the National Bank) and their lawyers (they shared the same firm of solicitors) to make the decision, but also a further agreement to keep the reasons for it secret.

The same would appear to be true of the discussions generally between the Government and the private banks. The intermediary appears to have been William Charles Taylor, a close friend of Chifley, a member of the Commonwealth Bank Board from 1941-45, and Coombs’s source for his account of the discussions.

The search has also shown that the whole matter, culminating in the nationalisation decision, may have originated at least in part from a mistake arising from the way in which the Council’s writ was worded, which caused the Government to believe that sections 18-22 were being challenged in their own right.

This was not the case – but it was three weeks before this misapprehension was corrected by the issue of the statement of claim, arguably too late to prevent it from taking root, not only in the Government but also among others, including bankers, and the media.

There is an appendix on the way in which historians have treated the events, which raises some troubling questions.

This is an edited excerpt from the introduction to a paper entitled ‘Chifley and the Banks 1947: Will we ever know what really happened? Comments are most welcome and may be made to bmdmlenihan@btinternet.com

Denis Lenihan was born in New Zealand in 1937 and was educated there (M A (NZ) 1959) and in Sydney (M Ed (Syd) 1971). He entered the Australian Public Service in 1960 and worked there in various departments and agencies for more than 30 years. Later he worked for the NSW Police Royal Commission and the NSW Police Integrity Commission. Now retired, he lives in London and writes on Australian and Irish history (see academia.edu) and on spies (see kiwispies.com)